I was half asleep when I first met Chris. I was waiting on a food van when he had taken a pause from reading a James Bond book to tell me I couldn't sleep where I was sitting. I normally don't take too kindly to being woken up (as he would later find out), but right now he was a stranger so instead of jumping down his throat I oozed kindness by mumbling a barely coherent 'uh-huh' and went straight back to being half asleep. Or tried to anyway; I eventually gave up and sought to engage him in conversation. We talked about the James Bond museum up in England where he's from, then on to the Mad Max and movie car one. We talked about a lot of other things I don't exactly remember, but what I do remember is that something that had urged me to talk to him was steadily growing clearer. Somewhere along the way I learned he wasn't eating right - just a sandwich a day - so when the food van finally came I grabbed enough for two.

The last free bus from where I was to where I slept came and went and though my eyes had been on the clock the entire time., I chose to stay. We talked about what he did in university/tried to do, then our dreams and reasons for being here, as well as our current situation. He was crashing with the Occupy Sydney group for free board and luggage storage, but every now and then he would sneak down to the MLC building and sleep on delicious carpet. He wasn't in Sydney for long, just until he got his motorbike up and running right again. Then off on a Junkyard Rally to the Snowy Mountains from which he would continue on across Australia. Listening to him right then, a light bulb clicked. I quickly checked our compatibility while he kept talking and with a manipulative smile, I found we fit pretty well. He came from a close family so it was logical he would want companionship on his journey; I wasn't doing anything. He had an incredibly strong passion so it was easy to tell he would talk about it to anyone that would listen; I liked to learn. He was comfortable with roughing it; I could show him how. He was too kind; I was too manipulative. He was lazy when it came to planning; I would do it for him. He had to pay for gas; I could split the bill. He had a carpet; I was sleeping on stone so cold not even a sleeping bag would help. He had a month left in Sydney; I had a month to manipulate a complete stranger into taking me with him. I bided my time until I thought I had a 90% success rate before telling him I should probably get going. The buses had stopped and I had a long walk ahead of me back to the Station where I was currently sleeping. Cold ground, here I come. As expected, he was too kind and just like that, I was invited back to 'his' place.

The next night he took me to my first Mardi Gras, then on to my first pub where he bought me my first beer. I had tasted some alcoholic beverages before, but never more than a fingertip's amount; turns out it still tastes as gross in a large quantity than in a small so he ended up drinking most of it. We pretty much had to yell over all the other customers, but I was enjoying myself to no end. I had never been in a pub before and though he kept telling me this wasn't a 'real' pub, I ignored him because it clearly said so over the front door. Silly Englishman. He must've enjoyed my company as much as I did his though because after that night we never spent more than a few hours apart. I introduced him to my homeless friends and bookshop, got introduced to the State library and motorbike parking lot. I took him to the food vans; he took me to my first concert. We made a day out of visiting the outside of the Sydney Opera House and the small park beside it where he attempted to teach me parkour on ruins I'm pretty sure you're not supposed to climb on. We ended up pretty much playing the floor was lava, instead, where you had to get tot he safe zone at the other end. I would've won too if I my jumps were longer...and I hadn't fallen. lols. 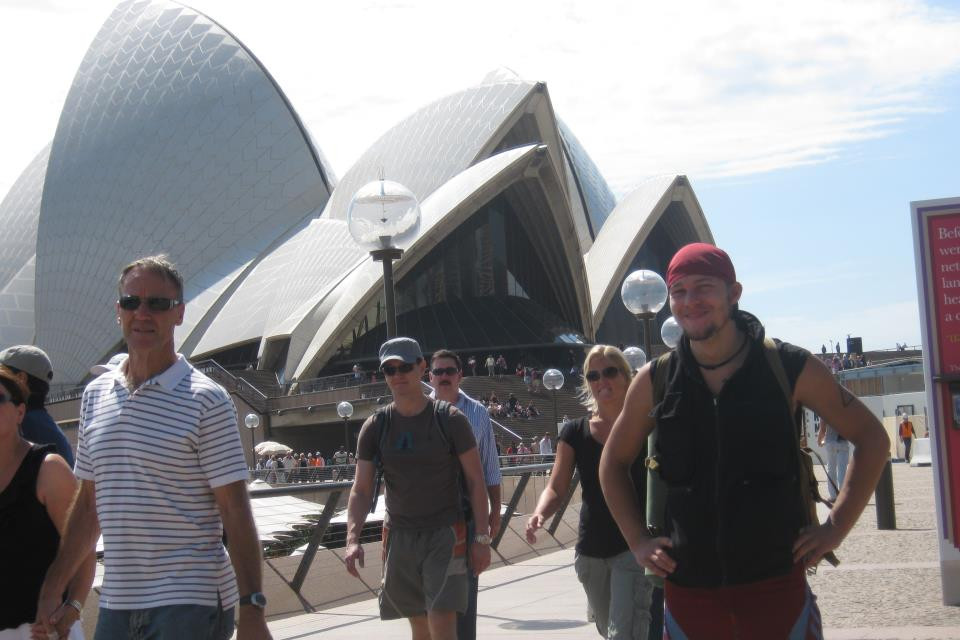 Hollywood is a Liar

I came to a moment in my life where I just needed to get away. Everything that had been happening in the last year or two was just too much; I needed a break and I went halfway around the world to get it. I didn't have any plans other than starting anew - no travel ideas, no thoughts of where to stay, no plans of what to do when I finally got there. I just wanted to get out and go and it turns out that was exactly what I needed. For the first five days I stayed at a friend's house who I had only ever known online. We had met on a RPG site and despite not being able to understand a word he said in person, over the course of a couple of years he became my best friend. After leaving Jono's the realization of just how chaotic my trip actually was punched me in the face and I admit, I kind of panicked for the first few days. Here I was halfway around the world, on my own, and no amount of life experience behind me. Fan-freakin'-tastic. Way to go Mri. But as they say, "You don't become old and wise without first being young and stupid" and boy was I stupid when I first started out. I'd like to say I learned everything from that one single experience, but i didn't. Instead, I learned only that specific no-no - the one where you don't stick your stuff in a trash bag, hide it under a bush, and then leave it for a few days expecting it to still be there when you got back. Though in my defence, the other two thefts were completely different. The second time I had trusted a group I shouldn't have and the third, I let myself be swayed to not put the rest of our stuff in our sleeping bags. Nothing major was ever taken though because I had the smarts to keep all of the valuables in my sleeping bags/on us at all times, so not a complete dunce. But definitely still on the level of noob with the desperate need of a sensei. I eventually looked up food vans in the area via free internet from the Information Centre (which is no longer free) and a few days later I was up late enough to actually greet one. As naive, stupid, and paranoid as I was, I hung about the edges just in case you had to flash some secret homeless ID card or something to get food. I swear I stood there for a full five minutes trying to figure out how they knew which ones were homeless and though I didn't see any card/signal passed between server and eater I still stayed cautious at the edges. Luckily, one of the homeless people noticed me and waved me over, let me cut in line because everyone there had already eaten. It was a lesson I would never forget - Hollywood is a liar. 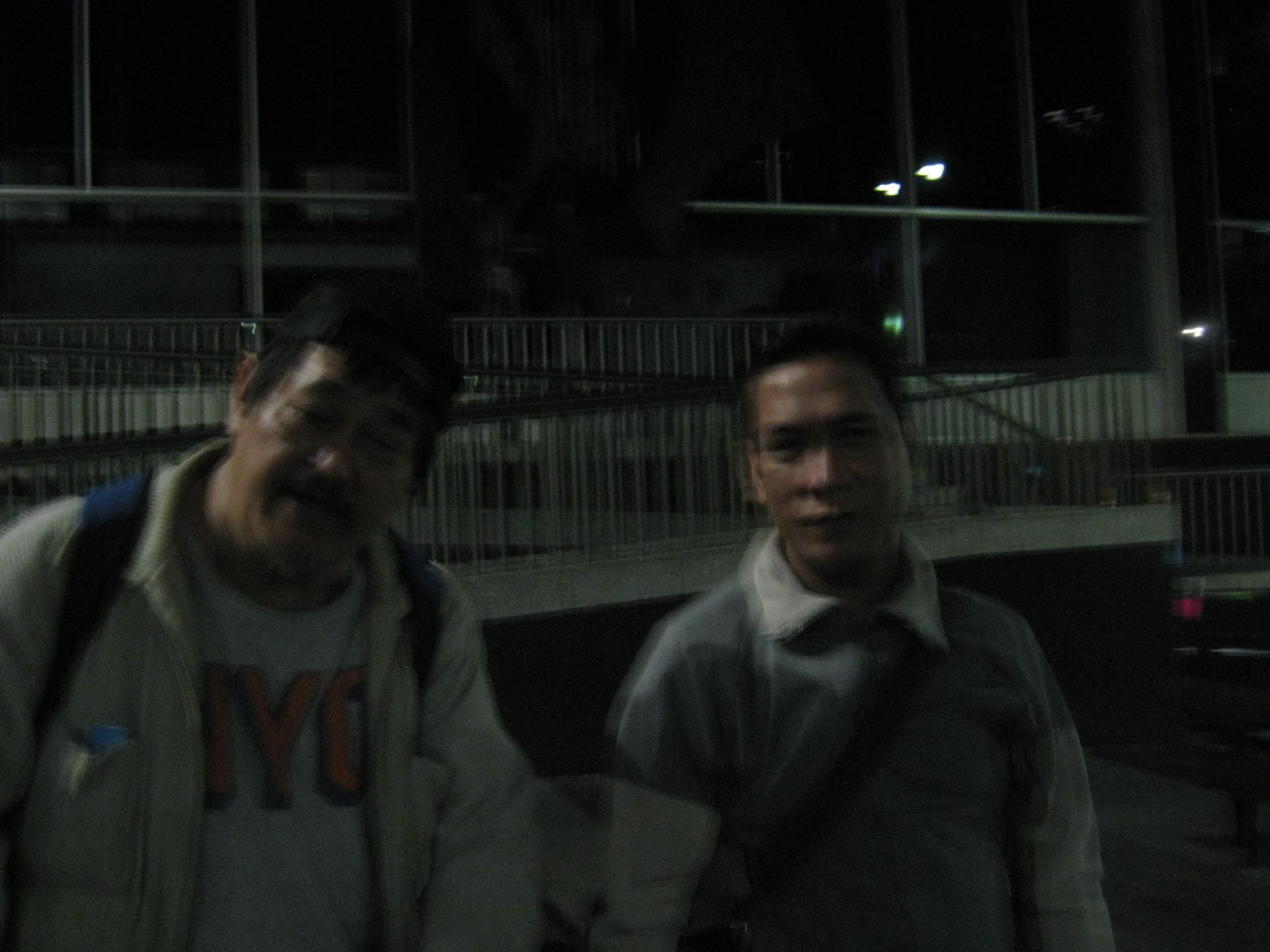 They weren't the crazies that you saw on TV, nor anywhere as rude or nasty. They were the same as you and me, just down on their luck - well, for the most part. As with all stereotypes there's that small percentage of the population that actually follows it so yeah, I met one dumb-ass kid who chose to be in that lifestyle because he got free money from the government and wanted to waste it on drugs. most however, were trying to find a way out or were too old/crippled to work. They took me in and helped me like very few people with jobs and stuck up noses would. They showed me the ropes, lectured me on how to keep safe, and invited me to sleep with their group so people wouldn't bother me as I slept and though that had yet to happen to me, it had occurred to almost every one of them via getting spit/pissed on, beaten by cops, or other. It was like one big friendly family, but like with every family there are the few black sheep and crazies. You stay away from the crazies and if you can't pick them out yourself despite their clear schizophrenia, the others will be quick to do it for you. I'm sad to say that it took me a few days to actually realize all this, but when you grow up with something shoved down your throat, you can't help but use it as a base to judge. Luckily as the days went on, I finally realized how closed my "open-mind" actually was and started to return the friendship that they had to easily offered me. I became one of their kin and thank the heavens for it because otherwise I wouldn't have found the answers I was seeking nor stumbled upon the adventure of a lifetime.